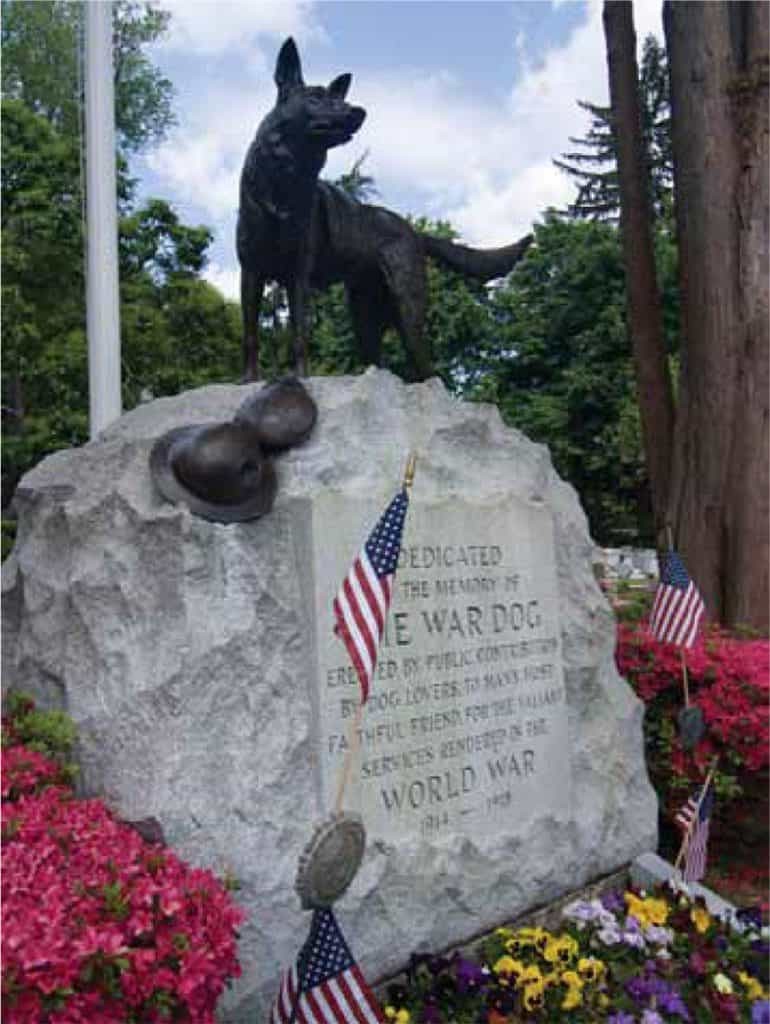 Without a doubt, the most significant event in the history of the Hartsdale Canine Cemetery occurred in 1923. It was the dedication of the War Dog Memorial. During World War, I— The Great War—The War to End all Wars—tens of thousands of military dogs was used for a variety of tasks, from pulling machine guns, to running telephone wire, to rescuing wounded men. Thousands of those dogs were killed. The United States did not have a formal canine program and relied on the British and French to supply dogs. Nevertheless, many soldiers came back from the war with harrowing tales of the services the dogs provided. In 1921, plot owners at Hartsdale mounted a campaign to raise $2,500 for a memorial to war dogs. A design competition was held and was won by Walter A. Bettendorf. His design depicted a German Shepherd perched high on a granite boulder, a helmet and canteen at its feet. The monument was sculpted by Robert Caterson, who had previously worked on a number of buildings in the New York area, including Grand Central Station. Caterson started with a 10-ton rough granite boulder he carved out from his Vermont quarry. The bronze statue depicts the shepherd with a Red Cross vest, alertly looking in the distance and tail straight. Look closely and you’ll see that the helmet at the dog’s feet is dented, indicating that the dog has found a wounded soldier. When the War Dog Memorial was officially dedicated in 1923, the event was attended by representatives of every nation that fought in the Great War. Eventually, the dog soldiers became known as the K-9 corps, and over 12,000 “dogs for defense” served in World War II. Over the years, there have been other memorial plaques placed at the base of the memorial, including one for the dogs who rescued victims from the rubble of the Oklahoma City bombing in 1995. Curiously, when the Oklahoma City dogs could find no more bodies, they became depressed, so some of the rescue workers purposely buried themselves so the dogs could find them and experience the joy of doing what they were trained to do. Buried elsewhere in the cemetery is Sirius, the only dog to lose his life during the search-and-rescue effort following the World Trade Center terrorist attacks on September 11, 2001. The Hartsdale Canine Cemetery, now five acres, is the final resting place for over 70,000 beloved pets. From perfectly preened pedigreed pups to mangy mutts, Hartsdale has room for them all. In 1917, the faithful dog of a coal yard night worker in White Plains had gotten sick and died. The man just couldn’t bear to “toss him in the street,” which was the practice at the time. He contacted the cemetery, and after being told that a simple unadorned plot would cost $15, he boxed up his old friend and took him to the cemetery for burial. When he arrived at the cemetery, he saw all the beautiful monuments and proclaimed that no dog deserved a monument more than he did. The cemetery allowed him to purchase a $20 tombstone on the time payment plan for 50 cents a week. The tombstone simply reads “Bum; Ever Faithful; At Rest; December 10, 1916.” Reportedly, the 2 x 3-foot plot was one of the best-tended in the cemetery. The coal yard worker’s dog certainly isn’t the only dog whose owner deemed him “top dog.” Just ask Tony LaMura.

We treat our pets like family during their lives, so why not give them the same dignity in the afterlife as we would a human relative? This is a pretty common sentiment in today’s society, but it’s actually nothing new. In fact, the country’s first pet cemetery opened right here in New York, and still to this day is the nation’s largest such burial ground.
Hartsdale Pet Cemetery was established in 1896 by NYC veterinarian Samuel Johnson (an early promoter of the ASPCA), who provided part of his apple orchard at his Westchester retreat to serve as a burial spot for a client’s dog. Now, nearly 120 years later, this area is the resting place for more than 80,000 pets, from dogs and cats to reptiles and a lion cub who called the Plaza Hotel home. Known as “The Peaceable Kingdom,” the grounds are also home to a 50-ton above-ground mausoleum for a pair of spaniels and the War Dog Memorial, a post-WWI tribute to military canines that was the first of its kind. Even Diana Ross, George Raft, and Mariah Carey have buried their four-legged friends here.

After offering a piece of his property for his client’s dog’s burial, Dr. Johnson appeared in a newspaper article about the event. His office was flooded with requests from other pet owners, and before long he had taken a three-acre portion of his orchard to officially serve as a pet burial ground. According to the Hartsdale Pet Cemetery, ” Soon little headstones, wire fences, and elaborate floral arrangements were peppering the grounds. It all came to a climax in 1899 when a spaniel named Major was put to rest in a glass-topped satin-lined casket while mourners sang an expressive doxology.” By 1913, news of the cemetery was so widespread that a deceased hound dog was brought to Hartsdale from Kalamazoo. It was originally known as Hartsdale Canine Cemetery but was changed since animals of all kinds came here to rest.

The aforementioned dog mausoleum was erected in in 1917, after Mrs. M. F. Walsh, the wife of a wealthy New Yorker, purchased the plot for $23,000 (over $400,000 today). The granite structure reads, “My Little TrueLove Hearts, Who Would Lick the Hand That Had No Food to Offer.” The 1923 War Dog Memorial is considered the most historically significant piece of Hartsdale. In 1921, plot owners at the cemetery launched a campaign to raise $2,500 for a final resting spot for the thousands of canines killed during the war. Walter A. Buttendorf won the memorial’s design competition for his depiction of a bronze German Shepherd atop a granite boulder with a helmet and canteen at his feet. Sculptor Robert Caterson, whose work can be seen at Grand Central, carved the memorial from a granite boulder found at his Vermont quarry. When the War Dog Memorial was unveiled, representatives from every country that fought in the war attended. Other memorial plaques have been added over the years, including ones for the dogs lost in the 1995 Oklahoma City bombing and the only dog who lost his life during 9/11. 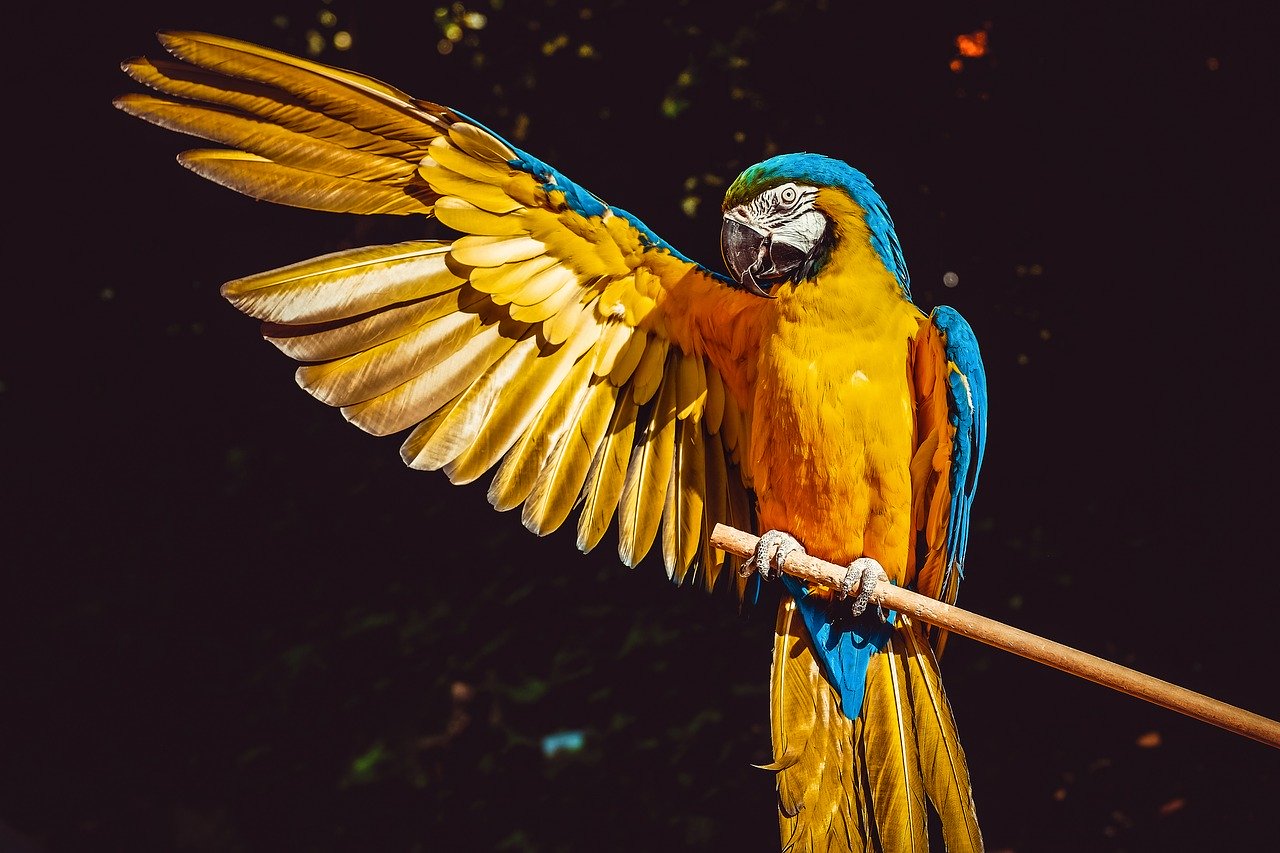 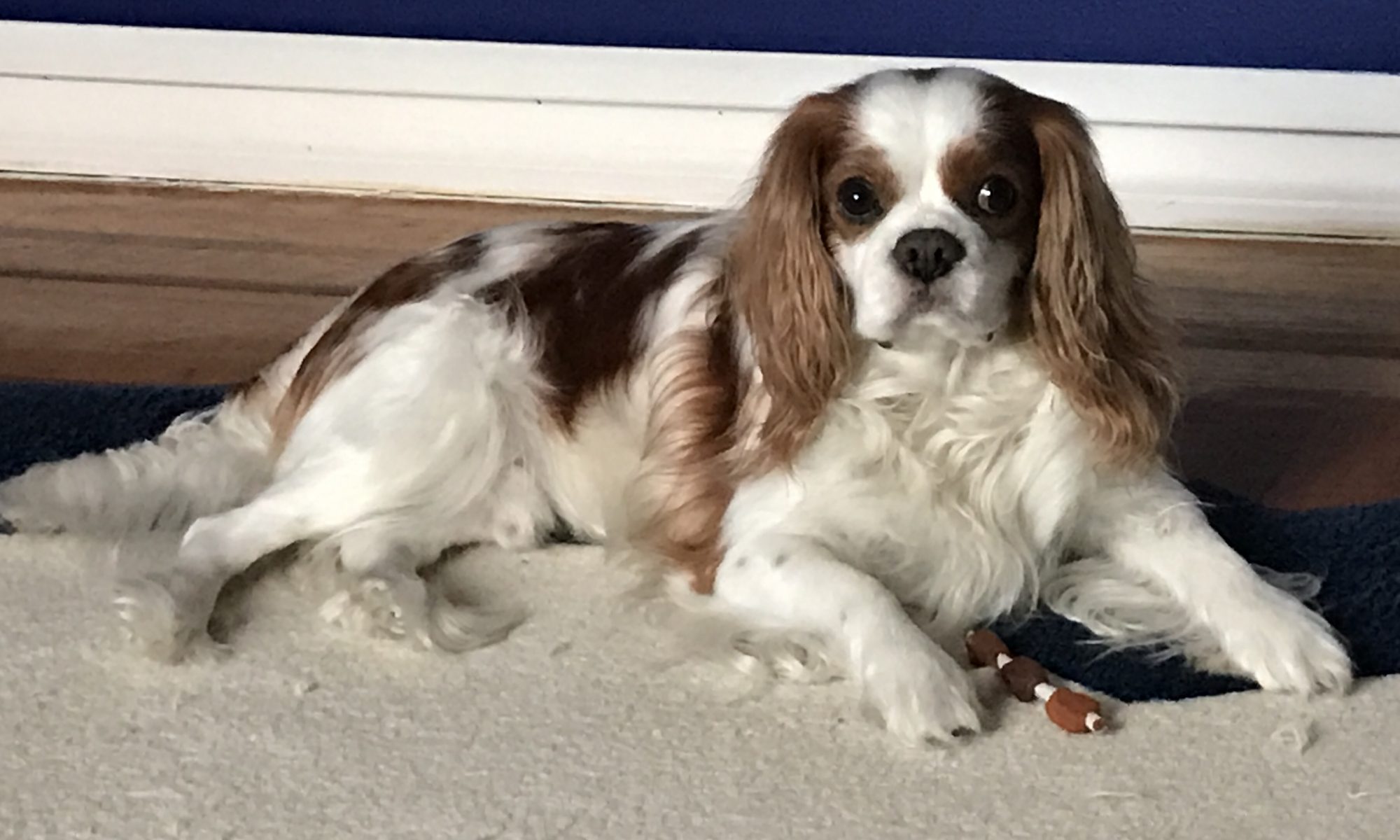